On Thursday the 14th of March, the first edition of the event “Industrial Reality” took place in The Gallery Enschede (University of Twente). Under the watchful eyes of more than 150 participants, the Industrial Reality Hub was officially recognized as Fieldlab. The assignment took place in an interactive VR session. The aim of the event was to make the various competencies and goals of the IR hub public. During the launch event, attendees learned more about AR/VR applications and capabilities. 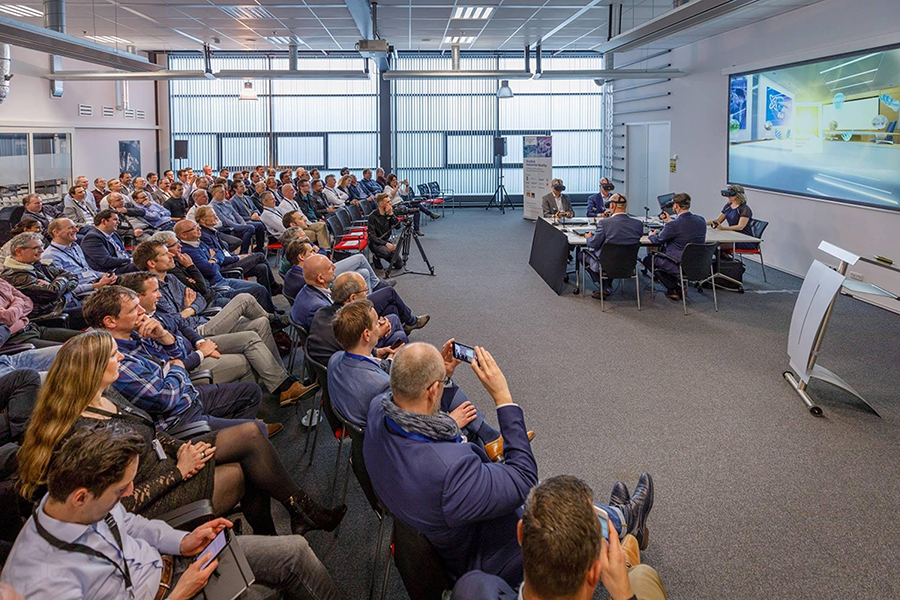 About Industrial Reality Hub
The Industrial Reality Hub is a unique cooperation between the companies Controllab, OVSoftware, SeriousVR, Recreate, Twinsense360, Xsens, The Virtual Dutch Men, Benchmark Electronics, Demcon-Nymus3D and the VR Lab of the University of Twente, under the leadership of the Development Agency Oost NL. Together, these hub partners provide all the technological capabilities in the field of augmented and virtual reality that are required to perform process innovation. “Augmented and Virtual Reality make it possible to discover the world in a different way,” says Christian Kleijn, who, as Managing Director of Controllab, chairs the Industrial Reality Hub. We have purposefully combined forces with various specialized companies to be able to use augmented and virtual reality effectively in the areas of industry, construction and health care. As an IR hub, we want to challenge the private sector to share issues and questions with us, so that we can seek the right solutions with our expertise.” 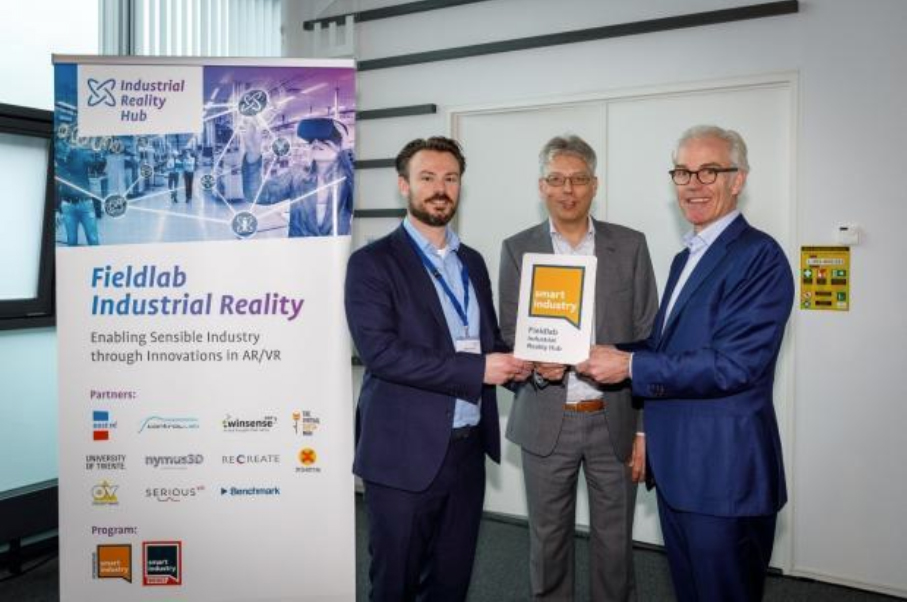 Fieldlab ceremony
In accordance with the competencies of the IR hub, Fieldlabs status in a virtual reality session was extended by Willem Offerhaus, chairman of the Smart Industry Advisory Board. “We want to launch the Netherlands internationally as an innovation country. Pooling knowledge and expertise in augmented and virtual reality in a consortium of specialist companies and a research organization helps accelerate technological development. This raises the chance of international recognition for the East Netherlands as an AR/VR hotspot. The IR Hub is unique and distinctive in both the Netherlands and Europe. The region East-Netherlands forms the bridge between the Netherlands and Germany.”

Sander Karnebeek from the Province of Overijssel also points to the importance of the “Industrial Reality Hub”. “As a province, we have a responsibility to ensure the future of the regional economy. The Industrial Reality Hub contributes to strengthening the region’s innovation potential and sets a good example of how to combine forces and expertise in a consortium. “Robbert Jan Kooij, project manager Tech at Oost NL and also the main developer of the IR Hub argues, the hub should be seen as a business-driven initiative, with the creation of business cases central. “In the Netherlands we are internationally recognized for AR/VR in the field of Entertainment, but not yet in the field of industry. The Industrial Reality Hub focuses primarily on the development of complex innovation projects.”

After the lively discussion ended, the panel team was encouraged to put on a VR headset. The conversation then continued in a virtual environment. The hub partners were introduced by means of a 360-degree tour along the hub partners and their locations. Four pieces of the puzzle in the colours of the Smart Industry program, symbolizing the invited table-mates, hovered in the air until at some point in a virtual way they united; Industrial Reality Hub is now officially a Fieldlab.

Guest lecture Microsoft
The guest speaker at the event was Martin Trion from Microsoft. He presented the Hololens 2 and claimed that the global market for business use of AR / VR is 64 billion euros. “Years ago, IBM introduced the personal computer. Mixed reality is now the driver of digitization, with the business market most interesting. Augmented and virtual reality play an important role as technology in the collection and development of data and information flows. The Industrial Reality Hub has the skills needed to intelligently handle large and heterogeneous data sets.”

Interactive workshops
An important part of the program are the workshops. Visitors to the event were able to register for three different sessions. During the New Business Models session, SeriousVR and The Virtual Dutch Men discussed what new business models are related to AR / VR. At the Virtual Industry meeting, Controllab, Twinsense360, Nymus360 and the University of Twente discussed AR/VR’s various capabilities in the field of industrial manufacturing and development. In the workshop “Future Skills”, companies Xsens, Recreate and OVSoftware set out some AR/VR applications that could be used to train, support and train employees.

The successful launch event was concluded with a clear call-to-action. Robbert Jan Kooij: “The partners of the Industrial Reality Hub like to receive concrete questions that they can solve in Fieldlab. The IR hub provides a quick scan for this purpose.”

The Industrial Reality Hub also presents itself internationally at the Hanover Fair at the Holland High Tech booth in Hall 8.