During the European week of Regions and Cities the Interreg North-West Europe project Climate Active Neighbourhoods won the award in category 4 “Building climate-resilient cities”. With this yearly award excellent European regional projects with innovative and impactful approaches to regional development are awarded. Since 2016 the municipality of Arnhem is partner of this project and has involved several neighbourhood in this approach to energy transition. 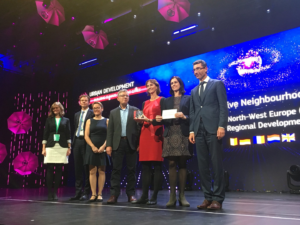 Municipality of Arnhem as partner of CAN.

In April 2019 the final conference of the project was succesfully organised hosted by the city of Arnhem. 96 participants representing project partners, municipalities, non-profit organisations, regional authorities, energy agencies and cooperatives, housing associations, consultancies, policy and science participated in the conference. A fruitful exchange of ideas and perspectives on  neighbourhood climate action was fostered during a keynote speech, a podium discussion, a thematic marketplace, two workshops and three site-visits.

Energy retrofits of existing residential areas make an important contribution to achieving the European goals on CO2 emissions. The CAN project focuses on underprivileged neighbourhouds that are in need of renovation in municipalicties and regions of varying size throughout northwest Europe. New governance models are introduced and a bottom-up approach is chosen. In Arnhem a local fund (AANjaagfonds) was set up to support neighbourhood initiatives to implement CO2 reduction measures. It succesfully finances external expertise and support, studies and communication activities. See the film about the project.

There was another nominee from the region East Netherlands in the category ‘Promoting digital transformation’. In this category around the digital transformation of companies, governments and (production) processes Digipro was nominated, but did not make it to the finals. Digipro supports Dutch and German SMEs not only in the realisation of intelligent products, production processes and business models, but also in the expansion of a cross-border network and the building and sharing of knowledge.

The INTERREG VA Project Digipro supports SMEs from the Dutch and German core areas with know-how and subsidies from the orientation phase to concept development and ultimately the construction of prototypes. By making use of Digipro’s cross-border network, cooperation between partners across the border is facilitated. It organises concrete activities such as information meetings, inspiring workshops and coaching with the ultimate aim of contributing to a successful digital transformation. 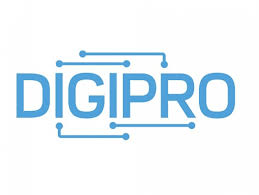